“We have been listening to such heartbreaking tales for the past few days. I thought why not end our day on a positive note? Why not end it with hope? Despite his struggles, Marullusiddappa not only found purpose in his life but also sought solutions for the betterment of farming community and humanity in general. The resilience in his spirit is commendable. It takes one sincere human being to make a difference. And, that’s what Marallusiddappa did. He started with himself,” said Arun with a warm smile.

Fallen leaflets eddied around farms as we crossed endless fields, that evening, one bend at a time into paths unknown. Up they rose in dizzying twirls. Some fell in defeat shedding their last tear. Some withered away whilst hung from above. They were signs everywhere, no matter where we looked. Signs of life wilting away…

“I had gone to Europe in the nineties. It was a long time ago,” said Arun staring into the fields. “A couple of us visited farmers there to understand and learn from their ways of living,” he continued, “Our lovely hosts offered us shelter in their guest house which was located in the middle of their farm. I had the opportunity of interacting with several European farmers and was thoroughly amazed with their lifestyle. Their villages are very well connected and have decent infrastructure. They assosiate farming with pride. And, we assosiate it with poverty. We still have a long way to go. But we will get there, someday.”

A slow smile worked its way across his face as he reminisced about his time there. He told us that he was fascinated with the women rights movement and how their struggle for equal rights fostered the emergence of radical women liberation in all societal aspects including political, social, cultural, and economic. According to him, the fight for women’s suffrage found a strong voice there thereby leading to empowerment and a sound understanding of fundamental human rights.

Our conversation veered towards the United Nations General Assembly passing a resolution in 1993 with the sole aim to solidify elimination of all forms of discrimination and violence against women. In fact, it strengthened the cause for altering the prevalent conventional norm of atrocities committed against women being a domestic or private matter and therefore does not warrant government intervention. The then General Secretary issued a statement highlighting the urgent need to promote and sustain human values apart from ascertaining that ‘the cause of women is the cause of all humanity’.

“If we are to create a world wherein every individual deserves the right to liberty, equality and live with human dignity, how then can we ignore or continue to suppress a section of our own society? This goes against the essential core of human existence. Human rights cannot be restricted to men alone. We don’t have a law on marital rape in India. It isn’t punishable under the Indian Penal Code. Apparently, it cannot be applied in our country since it doesn’t conform to our ‘Indian’ values. Some lawmakers even suggested that this would destroy the institution of marriage. It seems that our family system may be threatened. What about our daughters, then? Shall we continue to kill hope within their hearts in order to uphold our so-called ‘beliefs’? How can anyone justify such a baseless remark?,” he said.

His tone had a stern edge as he continued to speak for a while about issues that bothered him. Those that were rarely spoken about. His hands twirled in motion as he went on. He moved deftly from one subject to another. Soon, silence befell in the car. Moments crept by, and another road bent to the right. Another path swerved, and another village disappeared…
In Arun, we found a companion to whom we could confide our thoughts and emotions. He pondered over fundamental issues in depth and would constantly gauge the socio-cultural situation in his ethos. We soon realised that he was the support system we sought in our journey in Davangere and perhaps would become the anchor to our endeavours within the local farming community.

We’ve stumbled upon people like him throughout our travels whilst exploring rural India. People who are sensitive and concerned about others pain and suffering despite receiving no ‘formal’ education whatsoever. And, we’ve crossed paths with those ‘educated’ lot too. The ones who seem completely indifferent to social issues thereby proving that education isn’t a prime requirement for an individual to be socially aware and concerned. Instead, this quality seems to be innate and perhaps a product of one’s overall life experiences and environment. 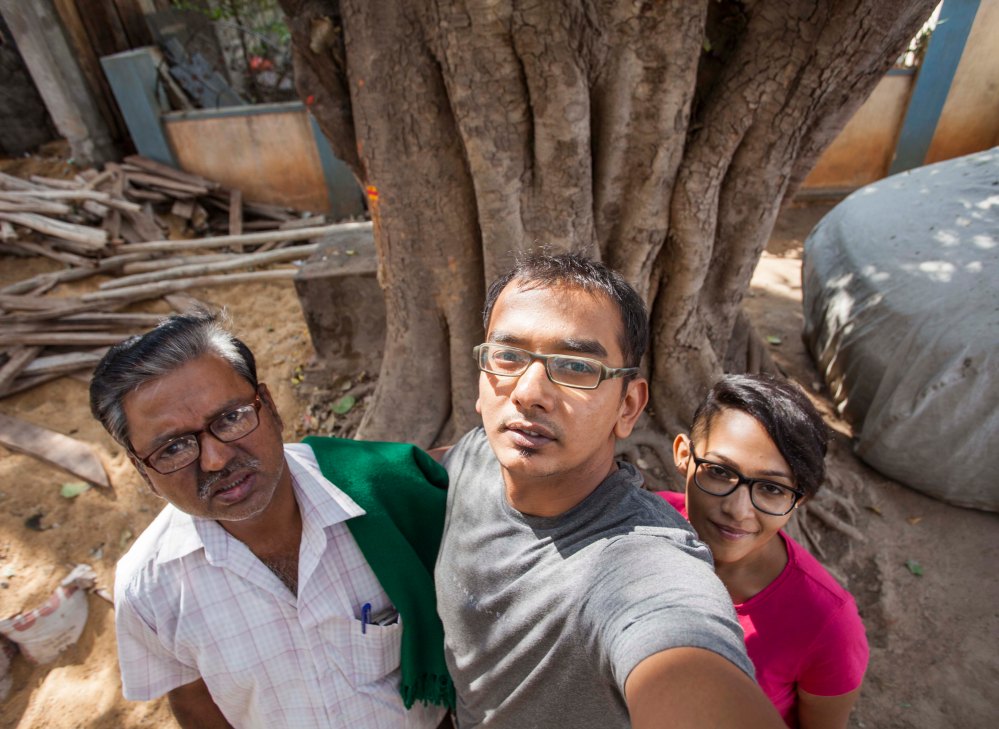 That evening, Arun’s sister-in-law cooked some organic rice that Marullusiddappa had given us. We were served a meal of fried beans, sambar and chutney podi. Her little girls ran around the house as ajji nudged them to sit beside her.

After dinner, we wondered aloud if there was a possibility of farmers uniting against all odds in order to start a cooperative society for themselves on their own. A revolutionary movement could then commence wherein farmers would have a complete say in prices quoted for their produce.

“It’s possible,” said Arun pondering over the thought for a while, “But do you know why this wasn’t done earlier? Why didn’t the entire community stand united against corruption and greed? Perhaps, the answer lies in one of the most dire issues that the Indian society has been embroiled in and burdened with till today — casteism. While some of us may claim to have transcended our differences pertaining to caste, one can’t deny its strong presence that forms the crux of a society that thrives on class-based hierarchical distinctions. If our farmers were to rise above these ideologies, we would be able to fight for their cause. But that’s a big ‘if‘ now, isn’t it? An upper caste farmer would rather die than stand with a Dalit farmer. If such rigidity continues to prevail in our farming community, then I fear we may never rise above adversity.”

At night, as the fan whirred softly in the corner, we thought about what Arun said. His parting words lingered in the air like an ominous reminder of what were to become of the helpless and downtrodden if caste-based divisions continued to reign supreme thereby bringing in a tide of indifference to social consciousness.

“Are societal distinctions far more important than our survival?” he asked, “There’s a lot that needs to change on a fundamental level. But where should the change begin and why should it begin is something that we need to answer ourselves. And, that’s what we have been chasing so far. Answers to questions that are never raised. And, questions to answers that are never sought…”

Through  ‪#‎RestofMyFamily‬, we will focus on highlighting social issues and human interest stories, documenting the triumphs of the ordinary man despite all the hardships they face constantly, and help these stories reach a larger audience and wherever necessary extend support to the individuals and communities that we write about. We hope to make a direct impact to the lives of those people we meet and find suffering due to various social issues; to connect the ones who need help to the ones who can help…. As a part of the first leg of the project, we have now embarked on a one-year drive (#DriveForChange) through rural India. Find more about the campaign here: http://igg.me/at/restofmyfamily/x/539502