After a quick meal at a Marwadi bhojanalay, we decided to head towards the office of the Deputy Superintendent of Police (DSP) in order to seek his permission to stay in Dhanushkodi for a few days. We drove through a narrow alleyway and soon spotted the bureau hidden amidst cluttered buildings.

At the entrance of the department, we found a supervisor busy taking down instructions from someone on his cell phone. Beside his table, the display board overflowed with memos, daily routine charts and emergency numbers of officers on duty.

“How can I help you?” he asked. We told him we wanted to capture the life of fishermen living on the coastline of a ghost town. Since Muleypara was around the corner, the occasion would give us an insightful glimpse into their traditional beliefs and culture. His face broke into a beaming smile, “It is an important festival for the community. It shouldn’t be a problem. Let me put in a word with Sir,” he said and disappeared into the DSP’s chambers for a while.

An officer entered the building and greeted her superiors. She gave us a quick glance and returned to her desk. In a cramped corner, a stack of papers fluttered atop a dusty file cabinet.Meanwhile other officers, subordinate in rank, hovered over a computer logging in their reports and discussing impending plans.

Soon, the supervisor emerged from the room and asked us to join him. We introduced ourselves to the DSP and explained to him why we were here. His name was Manivannan. He listened to us with utmost patience and in a stern tone said, “Dhanushkodi is an extremely sensitive area. Since it is situated close to Sri Lanka, the entire town is monitored by the local police, intelligence department, marine coastguard and the Indian Navy. There’s a heavy presence of authorities constantly keeping a watchful eye on the coast. I would like to grant you the permission but my hands are tied. I’d advise you to visit the Superintendent of Police in Ramanathapuram. If you get a written consent from him, then you can go ahead with your plans. Since he occupies a higher position on the rank structure, his approval will not only grant you access to the island but will also ensure that you don’t come under scrutiny by the various agencies patrolling the area.”

He seemed reluctant to be accountable for us in any way. Upon leaving the office, we realised that our fuel expenses would now hit an unprecedented rise since Ramanathapuram was 30 kms away. Nevertheless, we were determined to make this happen. We stopped at the bridge for a while to soak in the serenity of the waters.

On reaching the SP’s office, a constable informed us that he had just left to Madurai for a meeting. We then inquired with her if we could speak to the Special Branch Inspector, Vellaiappan.  “They will be back soon. You can wait for them in the hall,” she said.

After a few hours, we felt a sense of trepidation on being informed that neither of the officers had returned from their respective meetings. The constable then suggested we come the next day. Disheartened by the turn of events, we tried coaxing her into letting us speak with a superior. In a few minutes, a sub inspector walked out of the room and took down our details. He told us he would verify our story with the DSP and Dhanushkodi station. “This is just a routine procedure. We receive reports of suspicious LTTE activities on a regular basis. And, it is our duty to safeguard and protect the coastal town. I will keep the SP informed of your trip,” he said with a reassuring smile.

Braving the heat, we then drove towards swaying coconut palms and emerald waters that sunny afternoon as white sand beaches strung tunes of an undiscovered tropical paradise…

‘Oppression of common man led to the formation of LTTE’
As the morning wore on, the landscape shone bright against isolated shorelines. The jeep dipped into the sand and we swerved to a detour venturing into unknown lanes that led us straight to the ruins. Within moments, we crossed paths with an old man carrying trash and plastic bottles wrapped in huge nets on his shoulder. We spoke to him for a while and decided to offer him a lift to the settlement.

We spotted Kumar sitting in his stall dazed and lost in his thoughts. His little girl played with a heap of sand while her brother chased a few toddlers around their house. Business was slow today for there were hardly any tourists visiting the area.

He then led us to a nearby tea stall and struck a conversation with local fishermen. It was run by Kuppuswamy. Clad in a chequered lungi, his tall and lanky frame towered over the rest. Children came in groups with plastic bags and thermos to pack some tea, bonda and candies for their families. The men discussed everything from local news, politics to even issues or concerns that need to be addressed within the community. 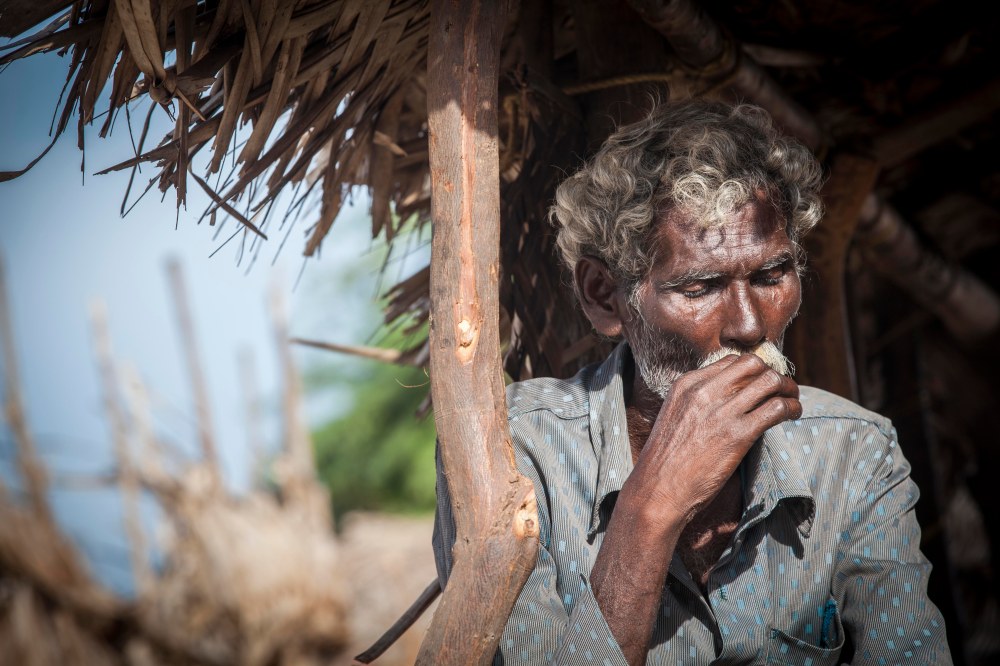 As we sipped on our tea, a young boy wearing a t-shirt with the portrait of Thiruvenkadam Velupillai Prabhakaran, the former chief of Liberation Tigers of Tamil Eelam (LTTE), passed by us. We wondered what their views were on the philosophy and operational methodologies of the organisation.  “Of course, we know what the group stood for and even identify with some of their ideologies. We are also aware of the atrocities committed by the Lankan government against Tamilians. What started out as a small group that looked out for each other and fought racial discrimination, developed into a full-fledged institution that eventually struggled to straddle differing views.  If their brothers or sisters were wronged or became victims of an immoral societal norm, they would lend them their support. Oppression of common man led to the formation of LTTE,” said Kumar.

Over the years, rumours of systematic torture conducted by the Lankan forces spread like wildfire all across the country and the shores of Tamil Nadu. He strongly believed that the Sri Lankan government resorted to unethical measures to curb the outfit’s progression. Expressing his displeasure over the situation he said, “They went after their families to send them a message. They attacked innocent people and children. This just strengthened the group’s resolve to fight harder. Their intentions were pure although the inherent breeding of violence within the institution gradually led to its downfall.  I don’t advocate violence but I do believe that human beings should be treated with dignity no matter what religion, race or culture you belong to. Philosophically, I am LTTE. Dhanushkodi is filled with LTTE. Anyone who has roots in pro-humanitarian causes is LTTE.”

Far from the clamor, sat a young woman playing with creaking dry twigs and dead branches. She couldn’t see us nor did her eyes return from the blank stare. Perhaps, she could relate to what the men spoke about. Perhaps she couldn’t. Like every element on the sandy shore, her presence too was neither judged nor unwarranted. For, in the arms of the ocean, they were all one…